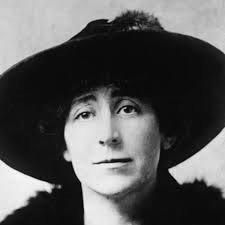 Peabody performs the role with verve and dash, and is as at ease with the stage as she is in wearing the skin of her character. A riveting performance that manages to pack nearly a century of history into each precious minute.

J Emily Peabody puts irresistible energy into her portrayal of Rankin, a suffragette, and activist who served in Congress,  making a history lesson feel more like a rally.

This biographical verve and dash one act of the first woman elected to Congress was highly informative and the enthusiastic performance of J Emily Peabody made Jeannette Rankin a name I wont soon forget.

A fascinating trip through the life of one of the strongest progressive voices of the last century . Emily's energy and enthusiasm for this woman's rights heroine is infectious.

J Emily Peabody gives a convincing performance as the first persistent woman in congress. The story is well constructed with a slideshow of historical photos and costume changes. CHERRY AND SPOON (Mpls)

Writer-actress J Emily Peabody embodies the time and essence of the woman in a stirring solo performance,

Is the writer and original performer  of JEANNETTE RANKIN: CHAMPION OF PERSISTENCE a one hour show about the first woman elected to congress from the state of Montana in 1916.  JR is famous for casting the only vote against the US entrance into the Second World War. But, Jeannette was so much more than that. See and hear this incredible historical drama.

Our mission is to plant the seeds of grassroots organizing in communities everywhere. That is what Jeannette would be doing right now, if she were still alive. As neighbors we might not always agree on how to get there, but by uniting in the quest for a common good, we WILL  make the world a better place.

For group ticket information or accessibility requests, send us a message.

We will get back to you as soon as we can.